Well there have been a number of issues recently and as I have been away it’s probably better to write a single post for updates on the last issues:

First, the Election in Malta…

Following my post and a number of complaints by others, the police did indeed question a number of people regarding their political campaigning, though I am not aware of any more arrests.  Also at the same time it was pointed out to me that the advertising that was posted to me was for the PL candidates and none for the PN candidates (even though they were as guilty) … I was not given any screenshots for the PN campaign, and whilst the time has been an gone if anyone wants to give me screenshots I will add them even now.

Following my post Air Malta have upped their advertising campaigns, including discounted flights, I suspect they are seeing sales being lower than planned.  Whether that is anything to do with my post I have no idea, but one thing is for sure they have no intention of refunding me or any other person for flights when they automatically cancel return tickets and/or make mistakes.  Since posting I have received a number of complaints from others regarding AirMalta including one lady that indicated that she suffered financial losses because of them on at least 2 occasions…. One which was some €1200.00… they even refused to play the tape of the recording where the person at Air Malta clearly says €60.00 per person and then they charged her €1200.00…

ARMS should have received service from the courts by now (though I haven’t been notified) following my registration of the Judicial Protest regarding their over charging me and incorrect billing of my Electricity, despite them being informed by my lawyers of their mistake in Law.  I expect the next step will be to actually take them to court over the issue…

Well all those know me, know I do not have tolerance for Political parties or Political grandstanding however, in the case of the 2013 Maltese Elections it is time I waded in with my 2 cents.  This is not a political statement for either side, because to be honest, if I were voting I wouldn’t vote for either one, both are in it for themselves and not in it for the people as elections really should be.  However, this is about the events (or more specifically one event) surrounding the election which is a clear disgrace…

According to the Maltese Law, 24 hours prior to the opening of the polling booths all campaigning must cease or those responsible will be in breach of the law and subject to arrest.  This applies to all candidates, parties and news media (both the services themselves and journalists.)

This evening, in Malta well know blogger and journalist Daphne Caruana Galizia was arrested for blogging about the election in her usual, sometimes course, manner.  This in itself is not wrong, and indeed it appears her arrest was made with good reasoning and because it appears she violated the 24 hour law.  What is NOT right and clearly a prejudice either against her, or what she stands for, the the fact that some of the candidates themselves continued their campaigning clear into the 24 hour ‘no campaigning’ period, and no-one else has been arrested.

Lou Bondi, from TVM’s Bondi+ was there at the time of the arrest and the video of the arrest has been uploaded to You Tube here.  Now before any of you the readers get hot under the collar about the police officers involved, please remember they are doing their jobs, they were told to make the arrest.  Instead, focus your attention and appeals on the two following things:

What follow are screenshots of the Facebook pages of some of the candidates and their delegates, all of which are in violation of the same law.  All of the people posting should be arrested on the same charges as Daphne Caruna Galzia immediately.  If the person ordering the arrest of Daphne Caruana Galizia is not willing to order the arrest of these people, that person should be fired and prosecuted for discrimination in the highest, and investigated for corruption. 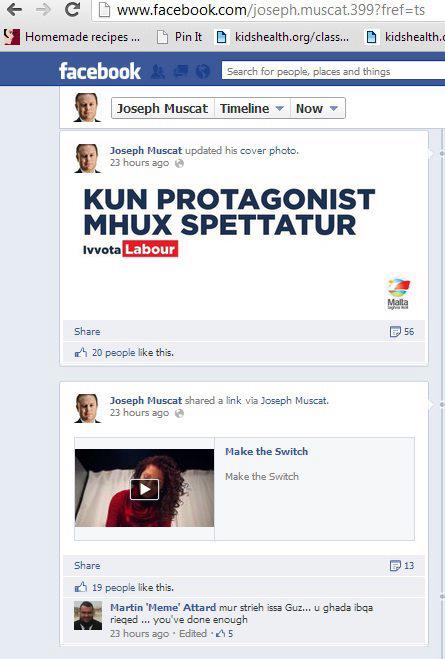 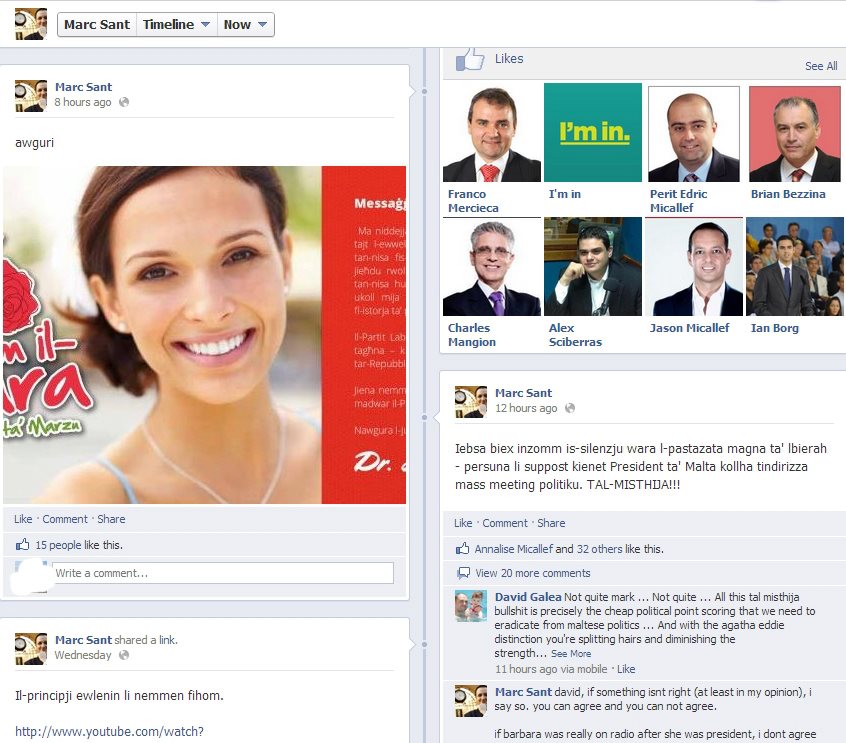 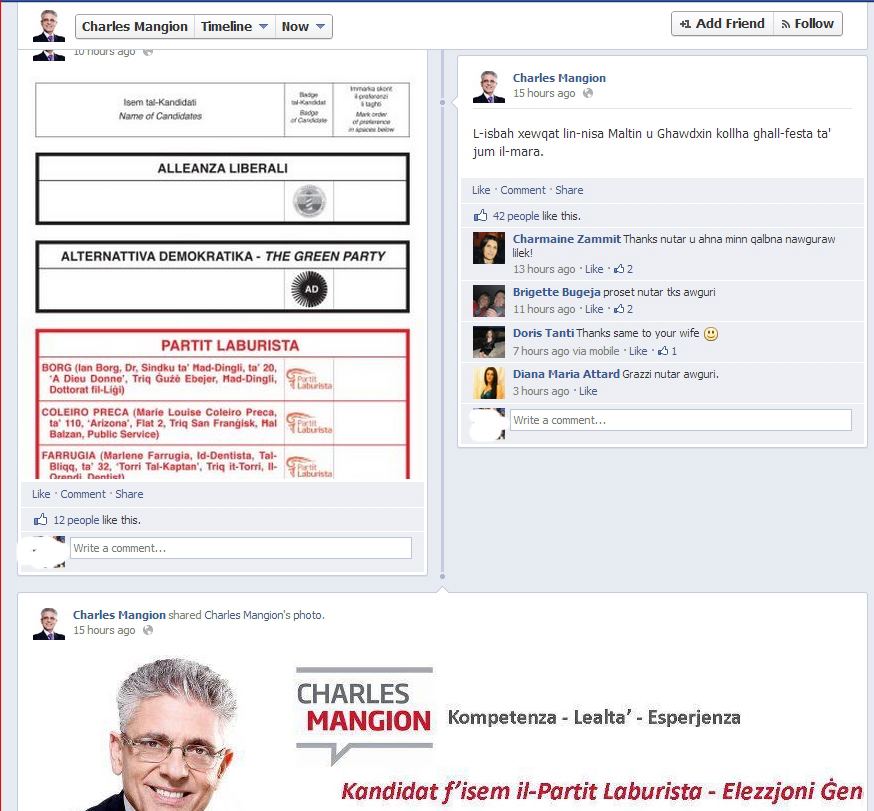 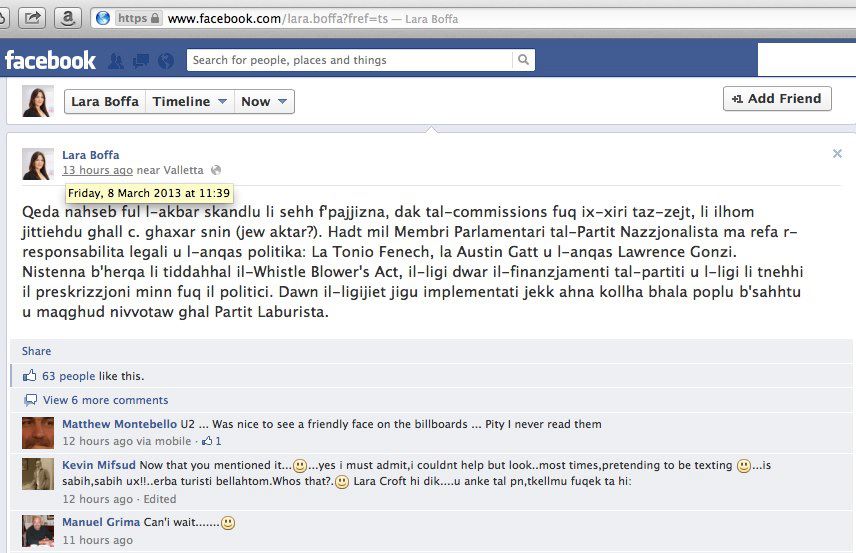 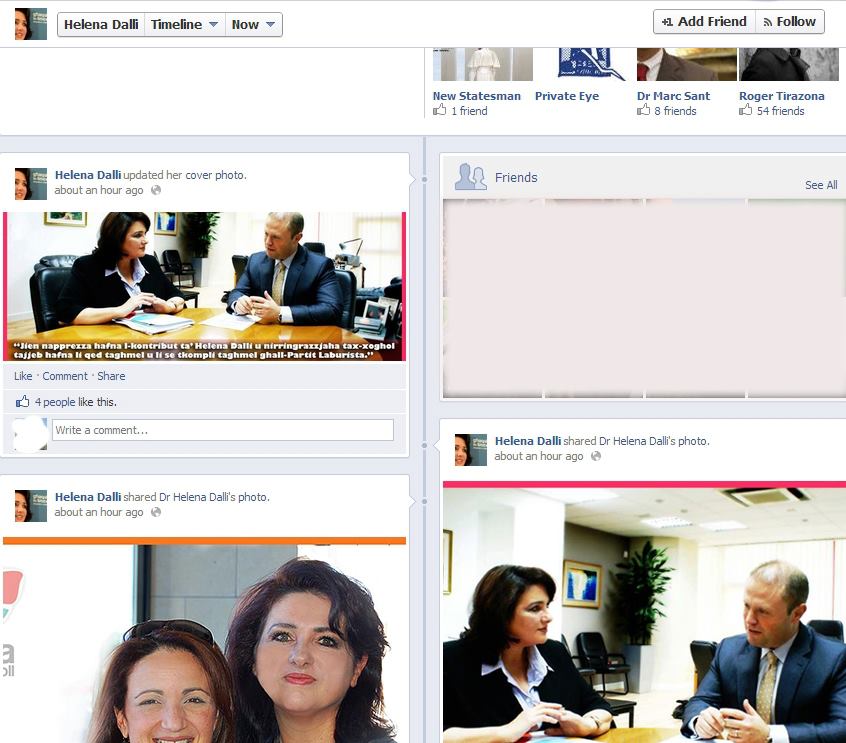 You will note, that there are candidates from both sides of the Election.  All should be arrested for the violation of the 24 hour rule as they are all clearly in breach.

Note: Comments are open, however any political statements for or against any party will be reported as campaign statements or deleted.  I will allow comments about the unbalanced treatment of the parties and journalists involved in this scandalous arrest.

Note 2: Just to be clear, I am in the USA currently, and have no idea of the timezones/timestamps on the Facebook pages, these have been reported as postings within the 24 hour window to me, please excuse and inform me if any are not in fact in the 24 hour window.  Also if there are other examples, please screenshot them and post them to me at michelle@shellsshots.com and I will update this page with them.