Well most of you should know I know a little bit about spam, and I have to keep researching it to keep up with the times.

Seems something that I have been saying for sometime and been unable to prove, I have finally found proof.

Recently I registered some new domains in new TLDs (Top Level Domains, eg: co.uk, com.au etc) and found that the bots delivering spam to my servers cared nothing about the server they were delivering to, but everything about which domain they were delivering to. I have for some time been the owner of 50 odd domains, and have access to around 3 million more, and as such I monitor the data coming into these domains and submit it to automated and semi-automated spamtraps depending on the domain, the connection, and the content.

On would expect to see a nice steady stream of hosts connecting delivering spam, and disappearing, and this is exactly what is observed. However, these domains are mainly .com, .net, and .org not to mention a healthy smattering of .us and a few other TLDs. The new domains are not available to persons outside of their respective countries, and to my surprised they collect spam, not from the 30k per day collected from the 3 million domains, but a whole host of new IPs. What’s more surprising, cross-referencing the domains against each other has indicated that the botnets behind the spam delivery are not used across the domains, they are local to those specific domains.

One can theorize how the bots are local to the domains, are they are split logically (eg by first letter or a hash such as ‘bots 1-10 mail @a

Bootnote: Unlike other organisations neither I nor SORBS performs illegal activities such as hacking compromised hosts, or locating the ‘command and control’ bot/server to analyse it or the networks. We perform the analysis by looking carefully at the networks the spam comes from and what is advertised, the process is called “Data mining” and with an expert (something I am not, but I do have a few friends who are) you can use data such as that I have been collecting since 2005 to find most things out about the botnets, their locations and sizes.

So how many people out there have suffered from discrimination? I’d take at guess at most of the population in one way or another… Personally, as a TransSexual, I have been the target of discrimination, ridicule and damn right rudeness for some time so I get more and more immune to it. 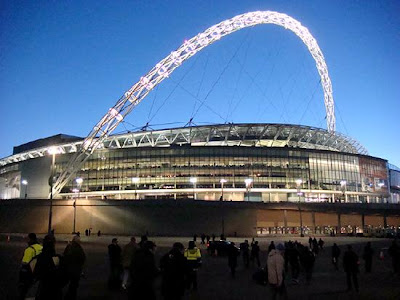 Today however, I write about a form of discrimination that all of us can be caught by. I’m off to a Rammstein concert on the 4th February 2010, at Wembley Arena. Now, I’m not all that much of a fan of Rammstein, don’t get me wrong though… I like the music, but my partner is the big fan and I’m taking her to see them as a treat for a devout follower of a band she has never had the chance to see live (not to mention the fact that I love her 😉 .)

Now the discrimination… Wembley Arena publish a “terms and conditions” list, which amongst other sensible things states (under “General Point 2”):

The Event Promoter may ask the Venue to prohibit the use of all, or certain types of cameras. In general, fixed lenses are acceptable, but please check with the Venue if in any doubt. Video/audio recordings are prohibited. Prohibited items may be confiscated.

Now knowing this, and and seeing on the Wembley Stadium site that they have a prohibited items list which includes:

Recently there was an article covered by many news agencies about the introduction of full body scanners in the UK airports. The Register covered the story in this article. I added my thoughts to the comments which were about the statement that the anyone selected for scanning would be scanned by someone of the same sex, wondering where they would find intersexed and transsexual people from to scan some of the people I know and myself….?

Reading through the rest of the comments today I remembered something from my past which reinforced Bruce Schneier‘s view and mine that our governments are actually promoting terrorism and causing more terror than the actual terrorists.

Way back in my youth there was an organisation called the IRA (Irish Republican Army) who spent an inordinate amount of time trying to blow people up. They succeeded on occasion and I remember as a child hearing about people dead and getting worried about getting blown up myself. I remember hearing that Lord Mountbatten had been blown up and killed by the same army. I remember many news reports in London of people being killed, but as I grew older I realised that these people were operating 100+ miles from my sleepy village of Ormesby St Margaret.

Around the age of 17 I moved out of home and started living on my own, and eventually around 1998 I ended up moving into London, by this time the IRA was pretty much defunct and various ceasefires had been called etc… I was not afraid of London or being part of some terrorist attack.

One morning I awoke in my flat at Norwood Green to the sound of a police radio. I poked my head out the window to see that the road was very quiet and there was “police line” tape all around and a copper standing directly below me. I shouted down to him, “Oi, what’s going on?” to which he replied, get in, an stay away from the windows. I asked why and was told there was a suspicious package in the middle of the green that could be a bomb.

Now, what did I do at this point? Did I run around screaming, and panicing? Did I follow police instruction? Did I go to the loo…? No I didn’t do any of these things….

The first thing I did was go to the lounge door and take a peek into the green, and there was a big can in the middle of the grass with a couple of wires on show etc.. I thought, “Cool, doesn’t look like a bomb, but you never know…”

Second thing I did was pick up my phone, and call my boss…

“John”, I said, “I’m sorry I will be a bit late in work this morning…”
John asked why, and I continued with, “well there seems to be a bomb outside of my house.”
He asked if I was joking, I said, “No” and he said, “Ok, well get in when you can.”

The conversation was quite comical on reflection, John was a little startled at first, but when hearing that I wasn’t joking or bothered, neither was he, and it was more like me calling in sick than being involved in a bomb scare.

THIS IS WHAT LONDON IS LIKE WHEN YOU HAVE LIVED THERE!!! You get on with it, you don’t panic, you don’t run around screaming etc..

When the not so recent bombs went off in the Tube stations and buses, the Metropolitan Police closed the transport system in London. From all the reports I heard from friends that were visiting or living in London, the biggest issue was not the bombs going off, not the likelihood that someone next to them could be carrying a bomb, but the fact they couldn’t move. Some had to walk 30+ miles across London to get home, some couldn’t get to work..

This is EXACTLY what the terrorists wanted, it hit the world wide news. It was front page for days, it was world wide, “London terrorised!” People couldn’t go to work, people couldn’t even drive their cars because if they lived in London you were grounded. Terrorism caused mass panic and inconvenience, governments called emergency sessions, new laws were dreamed up, and we have restrictions on our civil liberties that prevents our free movement.

What did the people of London think at the time, well all those I spoke to were shocked and sad, but they were more upset that the powers that be in London decided to stop London from operating. They wanted to get back to work, to get on with daily life. People cope with terror and disaster by going back to their daily routine, and what did the wonderful people in power do? They shut everything down and said, “Sit at home and brood about terrorist attacks because it could be YOU next time!”