The Internet of Things

So here I am seeing issues, reading about issues and trying to stop issues in the Internet of Things…  Everyday someone seems to be publishing articles on the issues, people are getting more aware (you’d think!) but there seems to be no real movement.

Some of my readers will know what I do for my day job, for those that don’t I wrote the SORBS Anti-spam system.. not quite the most hated, but some who should know better have said they just want me dead, then SORBS dead, then me killed again just to be sure I’m actually dead.  Several years ago I spent Christmas sitting in front of my computers rewriting part of the system, particularly that part that finds “bad stuff” and reports it (eg Open-Relay Servers) and whilst scanning hosts that were actively trying to send spam and/or viruses to me I came across the web page of a fridge.  The page half loaded before it became completely unresponsive and tracing it I found it on an IP address that appeared to be in Rome (Italy)….  When I reported my finding of a ‘Fridge Spamming’ to my boss all hell broke loose, blog articles were written, front pages were held and suddenly the world knew about ‘Fridges Spamming‘.  Shortly there after we got debunked by our main competitor of the time who asserted it wasn’t possible, the article however sparked off massive research and watching of the technology from a security stance.

In July of the same year a bunch of researchers at a University found that the premise of the ‘debunking’ was actually false and that with a specific sequence of commands it was possible to get the fridge concerned into a system ‘admin/debug’ mode that allowed a remote attacker to use the device as a simple proxy server and install other “apps”.  This largely went unnoticed in IoT industry with respect to the original report, I never understood why… perhaps someone can explain that to me? 🙂

One would think we have learned something, we certainly have seen more of these types of attacks, not always for spam but just as a device to get into a network, to provide the door way.  Indeed the attackers have pretty much made an art out of it, using combinations of direct hacks, social engineering to gain access or persuade users to install things and even stealing devices…  The lists and lengths seems endless, especially when you consider who is doing this sort of thing and even who is paying who…   We’ve all heard about Trump and Russia and the controversy, well there are teams of hackers in Russia who’s sole income is to break into systems and steal secrets.  Its not a stretch to imagine that they are not unconnected…  Personally I don’t go into the conspiracy theories but I can tell you there are companies and persons of interest that do pay for services of such teams and not just Russian ones, there are European teams, Chinese teams and American etc..

The result is a lot more tech out there, all with security issues and all trying to keep market share, by innovating or by destroying the competition.

All questions for you the reader (and hopefully some people that can effect change.)

So what is this blog post about? Why did you write it?

Well quite simply I chase down security patches for my services…  You see I still manage SORBS and recently we moved some of the servers around to a new Datacenter and as a consequence I changed a lot of security settings to make the systems more secure.  The fall out of this was I completely re-wired my home office network and the only thing on my network now that is not ‘secured’ (ie may have issues) was my wireless network.

Originally I had an OpenVPN connection for every service over the wireless that was an ‘authorised machine’ and a straight session login for controlling access.  I deliberately set the whole network to ‘Open’ (ie unencrypted) to remind people using it that everything can be watched so if it’s important, use HTTPS (or use the OpenVPN) etc. 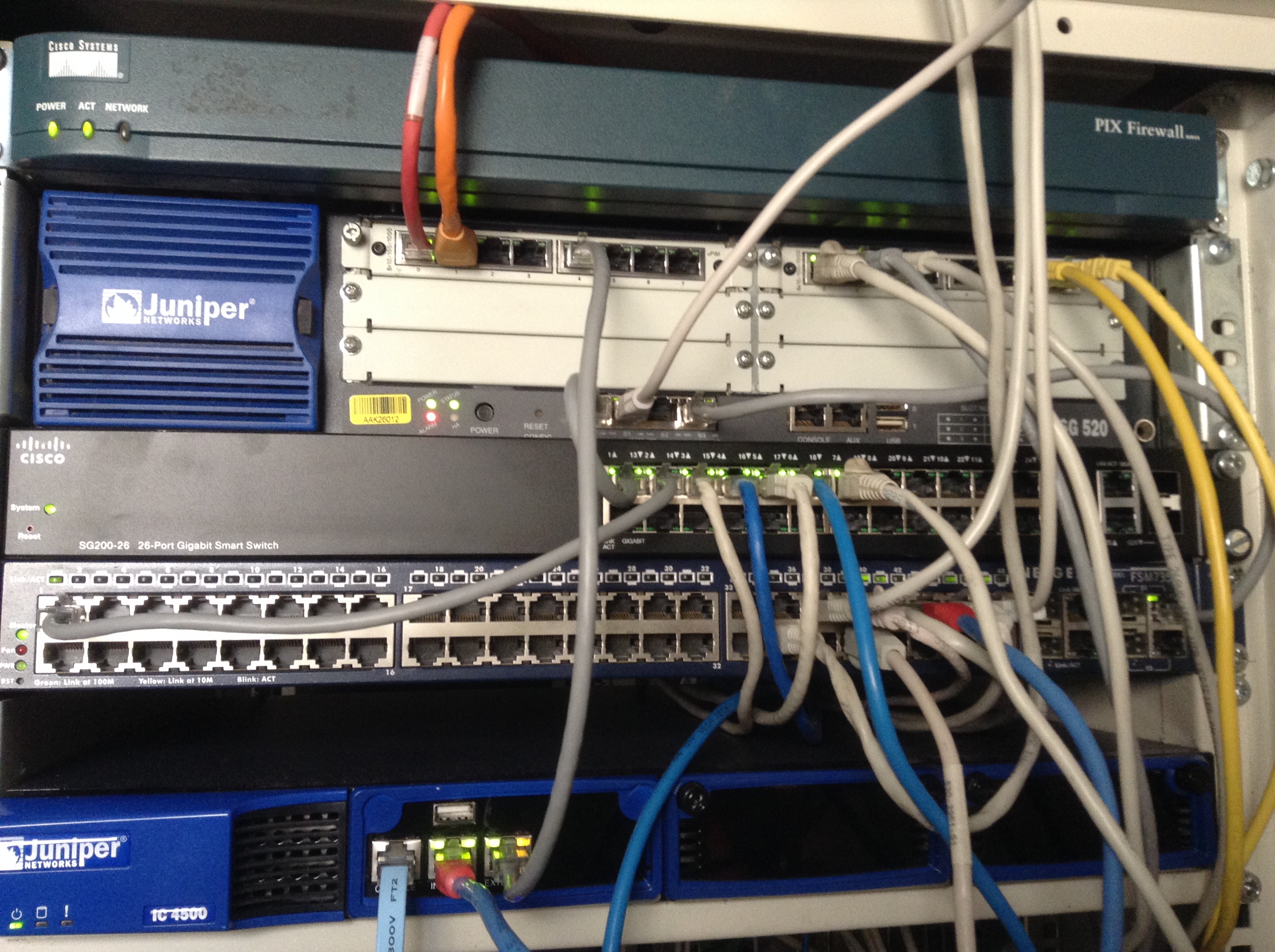 I decided to switch the network to WPA2-Enterprise for authorised users, and to use a Juniper NAC to provide a captive portal and control the logins etc…  I didn’t account for the ridiculous cost of the licenses of the Juniper NAC so even though I picked up a brand new IC4500 for less than €70 I couldn’t use it because the most basic license (to allow 25 devices to login) is over €1200 and using the Captive Portal aspect (which is what I actually wanted) it was going to cost over €4500…   I pulled it apart… I found that the IC4500 is just a Dual Core, 1-RU server with a couple of gigs of RAM, an 80G hard drive and 2 Gigabit Ethernet ports… so changing the drive to something larger and a bit of fiddling and I put the OS I have been developing on it (BSD Server UNIX -BSDSUX for short) and now I have a captive portal of my own making…  so last thing was to get the Access Points able to do both Open Security and WPA2-Enterprise at the same time, and when logged in get forced off the open wireless and allowed onto the secure wireless.

So finally to the point…

The Internet of Security Issues

Not so long ago a number of security vulnerabilities were hitting the headlines, and in particular ‘ShellShock’ so running Amped Wireless AP20000G‘s around my home which I happen to know run Linux I was a little concerned.  I had the latest firmware on the devices and this was dated  few years earlier (13 Dec 2012) so I emailed Amped Wireless about the issue and wasn’t actually told anything about the issue except they’d review the bug.  Time went by and more and more issues came up, and still no firmware… the latest one is CVE-2017-6074 which was introduced to the Linux Kernel way back in 2006, in fact the vulnerability description states this:

Now the clueful of you would know that this is a local privilege escalation issue and when it comes to routers, APs etc you’d actually have to get on the device to exploit it.  The same clueful will know that’s not as difficult as it might sound.

So figuring that I’m never going to get the firmware update I need/want I might as well go about hacking the router myself and building my own firmware that can indeed work with the IC4500 and finally finish securing my network to the level I want.

(and for those fed up with reading… if you haven’t worked it out… it’s 2017, the Access Point is classed as one of the ‘Internet of Things’ it is vulnerable to hacking on multiple fronts and 5 years later and I can’t get an update to the firmware – even though they are still selling these devices in shops!!!! … the gory horror for the techs is coming, so keep reading if you want…)

Which also tells me that normal OpenWRT support is not available (they don’t support RealTek devices mostly).. but more 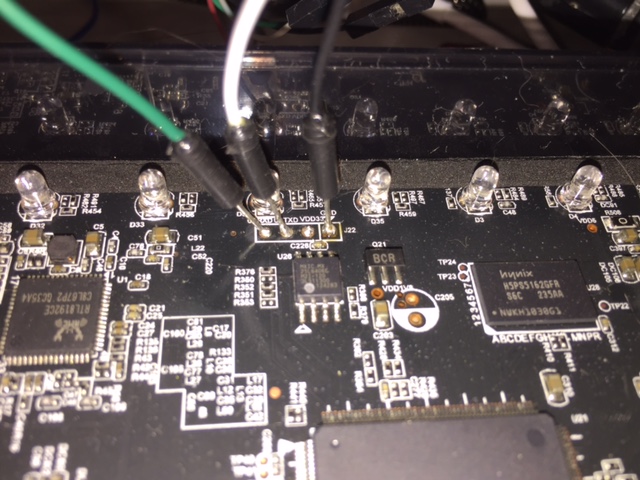 looking (and the WikiDevi page now says it) there is RealTek support by some authors.  Looking up the chips I also get information there is JTAG support (which is basically a serial port for debugging) so I got to work with my screwdriver and soldering iron and this was the result…

Which applying power produced the following in a minicom session.

As one can see straight in at a root prompt (no login – but hey, needs to physically connect to it with a soldering iron…), and we can see it’s running BusyBox (which means it’s running ash not bash so not vulnerable to Shellshock – nice of the company to tell me!??!?!)…  But confirmed….

So my next trick is to work out which GPIO pins I need to manipulate to get the power output control of the Skyworks (SiGe) SE5004L / 5004L power amplifiers under my control but that’s digressing from the topic of this post.  Poking around looking for the details and I found something else rather interesting…

.. That little thing that says, “dnrd –cache=off -s 168.95.1.1” .. What this program is is a DNS relay server ie something to help you resolve addresses from the names we know and are used to like “www.microsoft.com” into the quad octet that the computers can deal with called an ‘IP Address’.  Now the reason I’m pointing it out is that 168.95.1.1 is not something I have configured and it is not something on my network, so it tweaked my curiosity.  Turns out it belongs to a Taiwanese company “Chunghwa Telecom Co., Ltd”

So the not only is this Access Point vulnerable to hacking it’s also sending details of every site I’m going to back to a server in Taiwan…  Well not quite, because unlike most home users I am using my own DNS servers and have specifically blocked the access points from talking to the Internet… I am not your average home user though.  That leads me to the following conclusion that some will find scary…

The biggest current threat to our networks, our privacy, and our electronic identities (including funds) is the threat of the Internet of Things that have not been patched.

This threat is massive as the clueful people out there often can’t patch because the companies selling the devices are not providing security fixes because their profit is about getting new devices out there, not fixing old devices.

It’s even bigger because most of the world are not techs, they don’t even know how to update the firmware or where it would even be available if they did.

…Yet we’re all connecting up to the Internet, we’re all buying these boxes from household temperature controls available on your phone to Smart TVs and Fridges… even ‘Smart Bulbs‘!